My first digital camera wasn't even mine.  I got it to use at work, and it belonged to them.  Before that we had been using film and Polaroid, and this was a revolution!  I think we paid $800 for  it back in 1996. It took very adequate pictures, and it opened up a whole new world for me.  Mine was the second digital camera owned by the City.

As time went on, I had to have one of my own.  The grandkids were still little, and I had a computer at home.  I bought an Epson something. Then I upgraded to my Canon Rebel, then later my Canon D50. These pictures were taken with the Rebel.

The weather has been colder than a well digger's . . . . nose in the Klondike for the last week or so.  We haven't had snow to speak of, but every flake that fell is still out there. If you walk out and breathe, which folks tend to do, your nose hairs freeze, and shortly after that, your fingers fall off.

It is supposed to snow this weekend, so I can get new snow pictures, but for now, these from 2004 will have to do. I was a very casual photographer in those days. You will notice that the pictures don't look much different than the ones I take now with all the added effort.  On top of that, these are SOOC pictures, straight out of the camera.  No editing has been done on these pictures.  Help me out here!  I'm trying to make excuses.

The thing is, you can't go wrong with snow pictures. Besides, I love the snow. 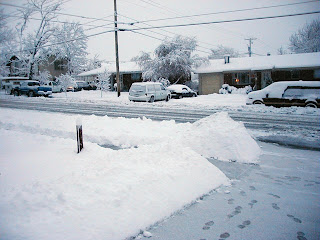 Rex is very particular about his yard, summer and winter.  It is watered, mowed, and trimmed in the summer, and the snow is shoveled to specification in the winter.  I bought him a new snow blower last year (or was it the year before?) that Bubby and I use.

This year will be easy duty, because we will only be doing our house.  Other years we have done Mr. Wilson's because his hip was bad and he was alone.  Mrs. C on the other side was an elderly widow who has since gone to her reward. She couldn't do her own, and her handicapped son wasn't able to shovel either.  The new neighbors living in their house are a young couple with little children and lots of energy. 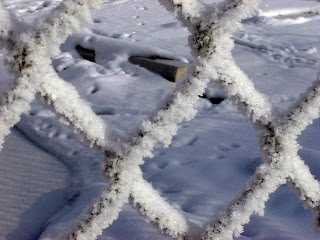 Frost is good.  Frost is really pretty.  When I'm at work, I see all kinds of frost and snow things that I need to take pictures of.  Of which I need. . . . you get the idea. 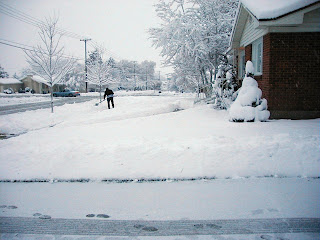 Look! There he is, my little man in the snow!  He shoveled his heart out in those days, not so very long ago.  Now he blows the snow once in a while.  We have big galoot Bubby and Nana to hop in there and help.  Grandpa's knees aren't what they once were.  Now they're titanium! 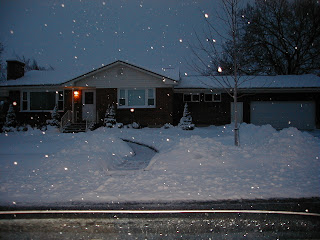