2009 is the year most everyone would rather forget.  We're in a recession, folks are losing jobs, famous movie stars were dropping like rain, and the rest of us are getting older by the minute.

2010 is something from the twilight zone if one remembers 1955 clearly.  And I do!  OK, I don't remember every minute, but I remember bits of it, because Mom brought home the first of three new babies I was to meet in our family. 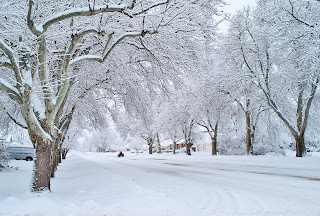 This is the year I got my new camera and photo editing software.  They have opened whole new worlds for me. I have more than the usual opportunities to take pictures through my work.  I've been worried lately that I'm losing that bonus, but this week I sent about 30 pictures for the Mayor to use in her State of the City address. 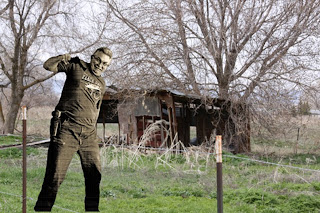 In the spring, Sisters and I went on a sheepherder's convention.  The three of us went all over town taking pictures and mocking ourselves.  It was so much fun we are going to make it a habit of it.  This picture of Hubby has supernatural powers.  It reduces Sister's honey into a chortling puddle from which it takes him days and weeks to recover.  It's a keeper. 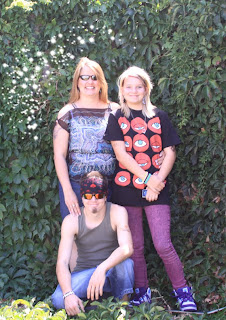 We got to see Sis for the first time in way too long.  She came for a week's visit, so we had another photo op.  That was the day someone called the cops on us because we were taking pictures in the cemetery.  I haven't been on the business end of a cop since I was a teenager. 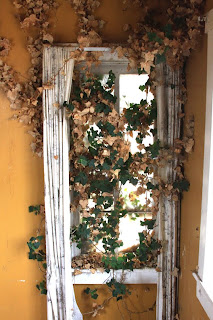 Another super photo op came around through my work.  After getting some really good shots, I asked if I could come back the next Saturday with Sisters to do it again.  One boss didn't care, so that was good enough for me.  The three of us have a really good time together.  We are lucky to be sisters and friends. 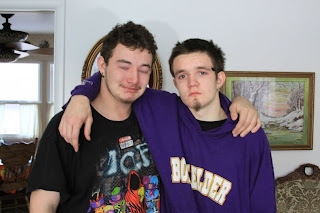 The time came when cousins had to part.  Boo Boo was heading back to Tennessee to stay with his mom, and hearts were broken.  These boys are closer than brothers, and the poor little sausages weren't as much parted from each other as amputated. 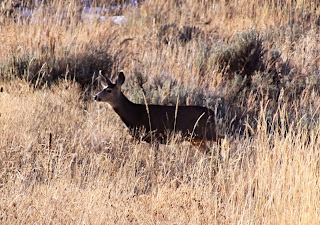 One last photo op in Mantua gave me a cheating opportunity.  I was supposed to be taking pictures of finished bathrooms, but how could I pass this up?  There were two does on the far side of the reservoir, but the other went the wrong direction and this one walked into the sun.

I suppose we  could take that as guidance, couldn't we?  There are cold, dark spots in every year.  Bad comes with the good.  Much has to do with choices, and I here resolve this New Year's Eve day to make every effort in the coming year to walk in the sun.