Having achieved the ripe old age of going on 60, I have wondered at my level of decorum.  Have I become stately and distinguished, or am I just a large dork?  Tough question, that.

It took me many years to accept the fact that I was not, am not, and will never be the delicate little flower my older sister is.  It wasn't for lack of trying on my part, but the fact remains.

My high school friend's mother was a substantial woman.  As she walked from room to room, she reminded me of the figurehead of the old sailing ships.  She oozed refinement, intelligence, and pure class.  She didn't walk as much as glide everywhere she went.  She made me see what was possible. 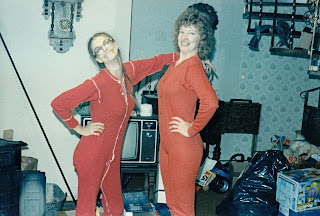 I
I didn't make a good start at it.  There was just something missing in the class department.  I worked at it, observed it, studied it.  I recognized a real lady when I saw one, just as I recognized females who were shoddy imitations. 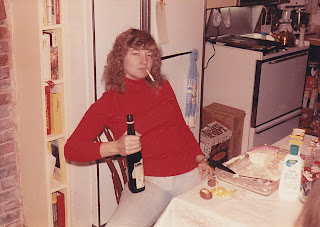 The early efforts left something to be desired.  There was one step forward for every two steps back.  One doesn't make much progress on that plan.
Having spent 90% of my working life in a man's world, it was much easier to become "one of the guys" than to be a lady around whom they could not cuss or scratch.  Oddly enough, I fit in.  This aspiring woman of distinction was part of the crew.
I finally accept my way in life, since I'm too old to change it now.  I threw in the towel the day I was introduced by the guys to the new boss with, "Oh, don't worry, it's just J.  She thinks farts are funny!"
Posted by Granny Grun at 6:12 PM