Sister was getting stir crazy! Cabin fever! Nutzoid! Spending the winter looking at four walls with no company except Tiny Dancer (who, although very sweet, has a wild temper!) had her doing the crazy laugh and fraying her hair!

All right that's a lie. The truth is, she wanted to get out and I invited myself along, as usual.  Then in our supreme intuition, we decided to drag Big Sister along with us.  This was a calculated risk, since BS is still in rather a fragile state of bereavement.  She was, as usual, a trooper and came along.

We decided that this was the Barn Day. We didn't get there in the summer when we first talked about it, but today was as good of a day as any to get it done.

We had to take a bit of a stop at Borders to buy some books, and at Sam's for a few necessaries, then off we went to Newton!!

Where's Newton, you ask?  Good question. With more luck than ability, we got there with only one minor detour.  Think of the Great American West, then think of Utah.  Once you are in Utah, stay far north, near the Idaho border out in the middle of the farmland and frozen tundra, and here we are.

The next question I'm sure will be asked, is: "Why Newton?"  Answer: That's where the barn is, silly! It's also where our niece's home is.

There is snow in Brigham, where we came from. There is SNOW in Newton, where we went.  Good thing I had my faithful little Jeep. Niece drove to the barn and we followed.  She was absolutely right, it was a fantastic barn. We stood on the road and took pictures because we are old babes and there was SNOW. 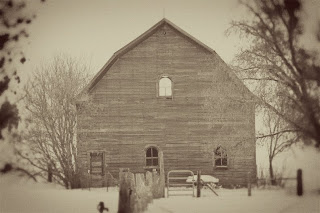 Niece had her baby with her in the car.  The plowed part of the SNOW by the road was hip-high, and I'm pretty tall.  On the other side of the SNOW windrow, a single snowmobile track led down the side and beyond the barn.  Little Sister, the adventurer said, "I'm going in!"
Crap.
Now, keep in mind that Big Sister and Little Sister are delicate little flowers. Me? Not so much. Think behemoth. Tons of fun. Beached whale.  Still, I couldn't let her go on alone. What kind of sister would I be?
Did you know that snowmobiles just kind of skim the surface of the snow, like a very large snowshoe?  Yeah, they do.  Did you know that even size 9 tennies are not like snowshoes? No, they're not.  (Step, sink, step, sink, wobble, lurch, etc.)
We made it to the fence behind the barn.  The side of the barn is as cool as the front, and I was perfectly happy to take pictures of the barn from the lone snowmobile track.
Little Sister said, "I'm going in!"
Brat.
Being the responsible big sister that I have been for many, many years, I knew what I had to do.
"You're on your own, you knucklehead!" 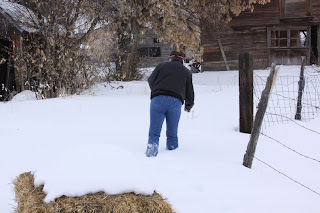 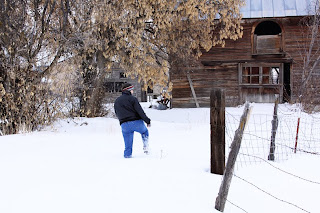 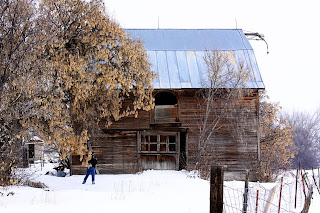 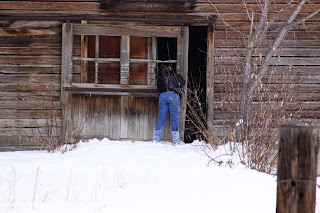 She peered in the broken window.  She eased over to the open gap, and squeezed herself inside.  Then came a terrible racket that sounded like I Don't Know What.
"Are you all right?", I screamed.
Nothing.
Crap again.
I'm not going in.  Did you see how deep that stupid SNOW is?  What if the whole interior of the barn fell on her? Niece said there are barrels of stuff in there.  What if she's buried under tons of them?
I guess we'll find her in the spring, cause I ain't going in!
Soon I heard the horrible racket again, and out she eased with no harm done.  At least, until I get my hands on her. 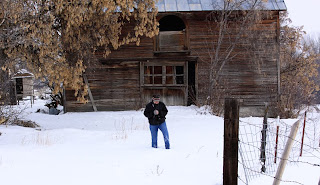 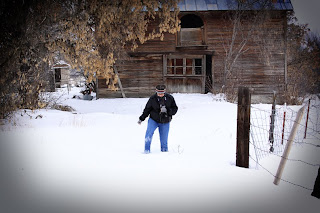 Back she trudged with frozen fingers and feet and a rosy nose.  We went out the way we came in, with the minor change of her taking pictures of me lumbering like a mammoth in front of her.

I did good until I had to climb over the SNOW windrow by the road again, then I went down like a ton of bricks.  Not the proverbial s*&t house, just the bricks.  Luckily the car was there to catch my fall.

When we quit laughing, we got Big Sister out of Niece's car, where she had the good sense to wait for her retarded siblings, hopped into the Jeep and went to one more location. 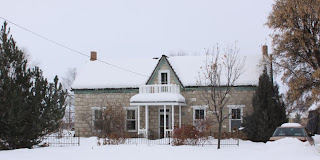 This is a typical pioneer house.  It has the little historical register sign in the front.  It's one of Utah's oldest homes, but in the scheme of things, Utah is a very young place.  Our Blackfoot and Shoshone neighbors beg to differ, but that is another story.
We voted among ourselves and decided that Betty had been a good sport, but was getting very worn out.  It was time to take her home.
We got to her house, took her parcels in, and the little doggie was waiting at the door in raptures. Her little tail was wagging so fast it was a blur. She put both her little paws on Momma's cheeks and kissed her and kissed her.
I got home and the granddaughter glanced up from the computer and said, "Hey, Nana", then went back to what she was doing.
Posted by Granny Grun at 1:14 PM